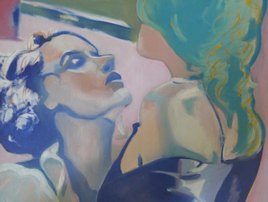 The L Word Art: How did you first get into painting?

Juliette Gorges Coppens: I first got interested with oil painting because of the technical side. I stumbled upon a book that had a lot of advice and recipes and I was right away attracted by the craftsmanship it requires. I came up with some patterns just to be able to paint them. What came out of it was really beautiful, luminous and full of colours. Later on that aspect fell more into the background but I still prepare myself a most of the products I use.

TLWA: How would you define your style?

JGC: I don't know. Colourful. In any case I am always first interested in colours, their personnalities, the harmony or disharmony between them. I like the Colourists like the Scottish schools (Anne Redpath, Wilhelmina Barns-Graham) or the Germans «Die Brücke» (Karl Schmidt-Rottluff) or August Macke.

TLWA: Of which piece could you say that it touched you the first time you saw it?

JGC: The Sistine Madonna by Raphael, not the angels at her feet but the mother and child. The melancholy in their eyes and the intimacy between the bodies. Facing a destiny that feels more tragic than glorious. I don't really know, but that painting really moved me.

TLWA: Do you remember the first time you showed some of your work to someone close to you? Was it hard to see their judgment on your work or was that not an issue at all for you?

JGC: No I don't remember the first time, but yes I do find that to be difficult. I can actually take into account some criticism when I'm not personally satisfied. If not, then too bad, it stays the way it is. But when others love it, then it is truly wonderful.

TLWA: Do you need to shut yourself from the world to preserve the creative process?

JGC: For the inspiration part of it, not at all. But in order to paint it's the opposite. I can listen to a little music when I take a break but the rest of time I need silence.

TLWA: When you start a new painting and have trouble completing it, what is your state of mind? Does it become an obsession or do you put it aside to come back to it later?

JGC: I've changed quite a bit on that front. I always liked to finish something I started. But with painting I have come to learn that obsession isn't the right way to go, whether in matters of inspiration or of technique. But it is also true that sometimes the best outcome only appears in the end. It is important to know the difference between obsession and perseverance.

TLWA: Amongst your creations which one is your favorite and why?

JGC: Among the more recent ones, that is to say the portraits, then without hesitation it is « Pink » which is on the homepage of the website. I think everything works, the intensity in the eyes, the sleeve of the dress slipping on the shoulder, the framing, the light on the skin and the colours of the background. There is also a mysterious quality about it because I don't have any pictures of the different phases of this work and it seems to have just appeared out of thin air.

TLWA: How did you come to paint the characters from The L Word?

JGC: Almost right away. I discovered the show fairly late in 2008 but, thanks to that, I got to watch it all at once. It was incredible because it was in perfect symbiosis with what I wanted to watch. But it was such a shock that I needed to paint scenes from the show maybe to channel their effect on me and be able to digest them.

TLWA: How did you come to exhibit in the LGBT centre? Was that the first time you got to show your work?

JGC: I had exhibits before with my abstract work but it was the first time I showed portraits. It's not that easy to find the right space to show them I think, mostly because of their subject matter. And there are 72 of them. But I was warmly welcomed at the Paris LGBT centre and I was happy to get to show some of them.

TLWA: If one of our viewers wishes to get one of your paintings, how can they go about it? If our viewers want to see your work or ask you questions, do you have a website or another way for them to find you?

TLWA: What projects are you working on these days?

JGC: I think I'll keep on painting subjects taken from the show but I also want to find some distance from them to deal with more personal themes. I have an idea that is still a little vague of a long frieze of only women that would show the evolution of the representation of women in painting throughout the ages.

French artist Juliette Georges Coppens has re-imagined the devotion (and the libido) of Showtime’s hit series The L Word by painting the lesbian love and lust scenes that once had us begging for Shane's touch and cringing or crying with every twist of Bette and Tina's relationship. Coppens has a special talent for capturing the intensity of some of The L Word's best moments, and her work gives us a chance to catch the characters again, but in a new way—still, vulnerable and timelessly sexy.

Coppens didn't see the series until 2008 but immediately fell for the beauty and ability of the actors. She said of them, "I'm still astonished by the originality and the sensuality of so many scenes." Bringing TV characters to life on canvas is no easy feat. To do it Coppens uses oil on canvass, using bold colors but paying more attention to the feeling and look of her subjects "The look (le regard) of a woman means as much as the scene itself to me." Each portrait shows the painstaking effort to get le regard just right. Fans of The L Word will be familiar with the faces of Bette, Tina and Alice showcased in her portraits and will be swept back in time as each scene all but places you in the room with them (we wish!)

To some, The L Word may seem like just another show—albeit the first of its kind—but Coppens sees more than just the seductive surface. She's interested in what The L Word represents and how she can explore those themes. She also wants to get more people thinking. She said, "Through my portraits I would like to talk about women, love, feelings, sensuality and sex, which is still a taboo...and as a woman who loves women I think I have something to say in that department.” Indeed.

If you are lucky enough to be in Paris this season, Coppen's work will exhibit at Centre LGBT in Paris, France from October 7th to November 3rd.